I only understood how coveted having eyelashes were to a woman when I became a make-up artist. There have been countless of times I have been asked by the regular woman, top model or the occasional big time woman celebrity if my eyelashes were real. You see, I have been genetically blessed to have long and curly eyelashes (click here). My eyelashes, time and again, have proven to be ice breakers and great conversation starters.

Usually the mood gets lighter once the “ice” is broken. I start asking the woman I am working with if she has ever worn false eyelashes. That’s when I start gauging what kind of false eyelashes I am going to use on her. Most women are “game” to wear them, while some are a bit apprehensive. The cause for concern about wearing false eyelashes is the comfort level. Usually, the added weigh on the lashes makes it uncomfortable. Sometimes ill fitting false eyelashes or using the wrong eyelash glue also adds to the discomfort and uneasiness. Truthfully though, at the end of the day, it boils down to a woman’s personality and spunk to wear them.

I have a stock of false eyelashes in my kit that I have been using for the past 7 something years of being a professional makeup artist. It has always been the preferred choice of the women I work with. In advertising, most of the jobs I get involves the “no make-up make-up look”; these false eyelashes pass the screen test most of the time.

The false eyelashes from The Landmark comes in varying designs of thickness, length and style. My style of choice is labeled as “Natural”. It is very light and it looks very natural. I don’t mean to carry my on throne, but reason why I chose this kind of false eyelashes is because they look like my very own eyelashes. 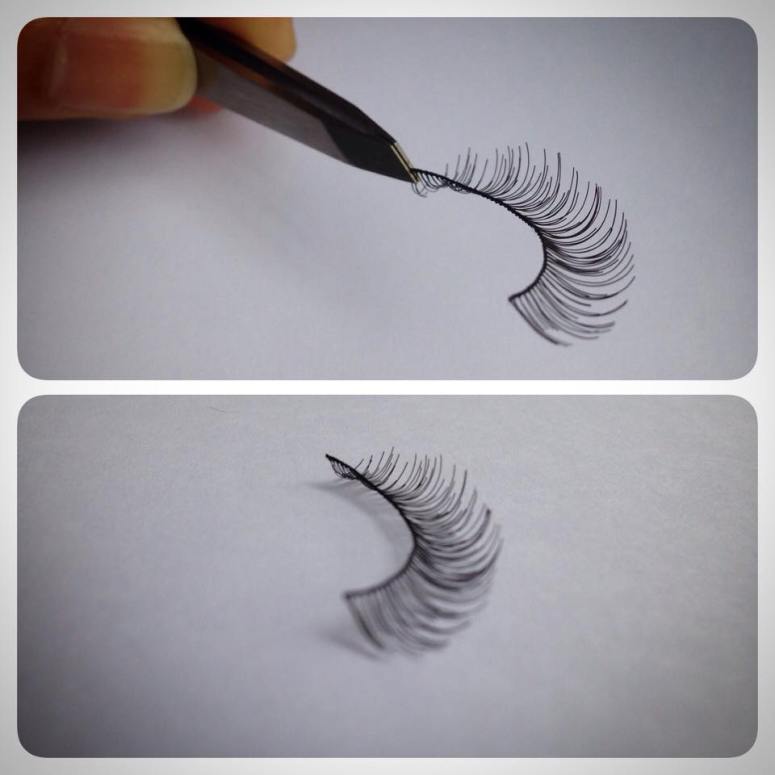 The “Natural” false eyelashes from The Landmark, is very easy to handle. The band that hold the lashes is quite thin, and the individual lashes are light. They only add very minimal weight to ones natural lashes, making discomfort minimal.

These false eyelashes are designed in such a way that the individual lashes starts off short (to be applied on the inner corner of the eye), gradually increasing in length towards the middle of the band , which then decreases minimally towards the end of the band.

When measuring this kind of false eyelashes, make sure to cut the band from the outer corner. Once you cut from the inner corner of the lash band, you will loose the indicator for which lash goes on for which eye.

I used the “Natural” false eyelashes from The Landmark on a few projects of mine.

I used it for a TVC for Penshoppe, click here to see it.

I used if for a TVC for Pantene (Indonesia Airing), click here to see it.

I used it for a TVC for Carefree, click here to see it.

I used it on Alamela Rowan for a print ad for CARA Welfare Philippines, click here to see it.

I also used it on all Bridal Editorials I had with Metro Weddings, click here to see it.

I highly recommend these lashes to ANYONE.Aside from the things I stated earlier, this is a practical purchase based on the fact that, most false eyelashes worn by women for special occasions end up on the garbage can at the end of the night. The  “Natural” false eyelashes from The Landmark retails for Php 49.50 (US $1.25).

This is good to use for practice. This is also good to use on the bottom lashes for effect.

You can also reuse this, as long as you clean it using a mild makeup remover to remove glue from the band and makeup from the lashes. Don’t throw away the packaging, you can store it there for future use. That way you are still able to keep the lashes in shape.

4 thoughts on ““Natural” False Eyelashes from The Landmark”

Tor is a freelance Makeup Artist in the Philippines. His work can be seen around the Southeast Asian Region in countries like Thailand, Indonesia, Malaysia and Vietnam. Tor loves traveling on a budget and backpacking in different countries. Life is bringing out the TRAVELER in him.

Chiyo always has a way of ruffling the sofa.
One of the most surprising thing that I have noticed after using the Ageless Matryxil 3000 Cream for 8 weeks is that, my pores on my nose have minimized in appearance. Which is a big deal to me because I do get black heads in that area.
Smothering Tanner.
Matryxil 3000 is a Peptide complex that helps your skin fight the signs of aging. It helps your skin produce more collagen and elastin that strengthens its bonds which helps minimizes the appearance of wrinkles PLUS it brings down inflammation.
Enjoy your “The Clash” Journey! #Repost @granadajerome
Dropped a vlog last week featuring some products from @lauramercier - their Tinted Moisturizer Blushes and three RoseGlow Caviar Sticks in mini sizes. These were part of their holiday release.
Good luck on your “The Clash” journey! 🤗 #Repost @rexbaculfo
Everyday is #Sunscreen day.
I passed by my fave framer in Quiapo to have these two water color paintings framed. I picked these up when @fyhtravel, @chololaurel and I were passing by #Ouarzazate, #Morocco last June. I have an affinity for water color paintings because I found it difficult to work with back in college. In hindsight, I guess I was just impatient.
#Quiapo photodump with mama @reyarciaga! Did a much needed “supply run” for a project. I haven’t been here since pre-pandemic days and it’s as if nothing has changed. The Baguio vegtables look amazing! My fave framer, the food stalls, the candied Tamarind 🤤, and even the “spicy” lady selling colored candles is still there - na gusto kong pagsabihan na magtirik sha nang Dilaw na kandila para sa sarili nya.
Hey #FudeLovers!
Although The Traditions Holiday Trio from @soniagbrushes is no longer available @beautylish, I was quite happy to be able to get the chance to play with brush heads made of Yellow and White Canadian Squirrel. They serve an educational purpose for me.
#Unboxing The Traditions Holiday Trio from @soniagbrushes ! This was a limited release for the holiday season and I’m so glad I was able to get one because of the fibers used on the brush head.
So glad I was still able to find the Red Haring lipstick from the MAC Viva Glam X Kieth Haring collection! This was a limited edition release and a collectible item. This is one of three variants and I’m glad they’re now all complete!
These Creamy Blush Stick Duo’s from @otgeasybeauty are relatively new to the market but they are now a staple in my kit!
I have not sent out a letter via the post office in a really long time! 😄 Quite nostalgic actually to paste the #PostageStamps on the envelope - as I used to do back in the early 90’s.
Machuca, who is usually fond of sleeping on sand, has found solace from the rain on the mat today.
It’s been raining here in Marinduque ever since we arrived - and Milou is my mood at 10 in the morning.
Join 84 other subscribers
Loading Comments...
%d bloggers like this: